What's on at Picton Little Theatre

Tickets and full information for all shows are available online at Eventfinda.co.nz
Cash sale tickets are available from Summit Real Estate Picton, Monday to Friday

Mad Doggerel Cabaret
SHOW CANCELLED, SORRY! EVERYONE WITH TICKETS CAN REFUND THEM.
​Why not book for our Saturday Laughs show on 20 August while you're at it? :)
​​

MC'd by Patch Lambert
Patch Lambert is an award-winning comedian based in Wellington, NZ. A 2017 Billy T Award nominee, he also appears on TV3's 'The Project', has written for TV3's '7 Days' and is a regular fixture throughout the country's pro comedy circuit.
"I honestly consider it one of my highlights of the festival. " - The Speakeasy
"...all the elements of a suburban Kiwi icon" - Theatreview

Headline act Lesa Macleod-Whiting
Lesa is an award-winning Wellington-based comedian, writer and improviser.
In July 2020, armed with six minutes of jokes about Stage Challenge and thr*sh, Lesa began her stand up “career”, going on to nab the Runner Up spot at the Wellington Raw Comedy Quest and then nabbing no spot whatsoever at the National Raw Quest Finals. Despite this, she went on to win Best Newcomer at the 2020 Wellington Comedy Awards and is now a regular on the Wellington pro circuit.
More acts to be announced!
The event made possible with support from the Marlborough District Council Creative Communities scheme.
BOOK NOW 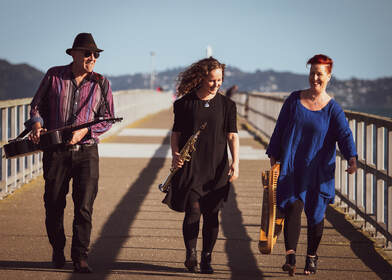 Across the Great Divide
Sunday 18 September, 7:30pm
$20 + booking fee
World music in a true folk roots fusion
Acoustic Americana meets Celtic Spirit!
Prepare you dancing feet, vocal chords and heart! Here come Across the Great Divide, featuring traditional, contemporary and original songs and tunes from Celtic and Americana roots.
Karen’s fiery accompaniments matches her blisteringly paced, guitar fuelled jigs and reels as Tony adds his relaxed dobro harmonies to add depth and splashes of musical colour and Hanna fills you with delicious unworldly vibration. Before you’ve caught your breath, they shift gear into a gentle Celtic air on the harp - and then the soft Scots burr of Karen’s voice breathes life into an achingly beautiful traditional song as Tony adds sensitive counter harmonies on the dobro.
Almost unknowingly you are drawn into and welcomed to their special Transatlantic musical world. Original and traditional tunes and airs; Americana original compositions all receive the same skill and passion in their delivery until you are no longer aware of their different musical roots, nor any divide at all.  Only their infectious sounds.
An Across The Great Divide concert isn’t a quiet affair. Strap yourself in for a wild, toe tapping and emotionally laden journey, perfectly held together by their passion for their traditions.
https://www.acrossthegreatdivide.website/videos
BOOK NOW
Coming up in 2022
​October 1 Members Only Night with 2 radio plays, nibbles and entertainment  — meet our sponsors and volunteers, get involved with community theatre!
October 16 The Bicycle and the Butcher's Daughter (Arts on Tour NZ)
November 1 Grant Haua Awa Blues (Arts on Tour NZ)